Home >> Blog >> Elevated Radon Levels are No Cause for Panic

More and more news reports are surfacing about elevated radon levels being detected in homes. Even with the news that Health Canada tests have discovered more than 1,400 homes with radon levels above the recommended action level, there’s no reason to panic, because there’s plenty of time to alleviate the problem.

In the short term, radon poisoning has no significant effects and mitigation is not as costly as you’d expect. That being said, if elevated radon levels are found in your home you should take action to reduce them as quickly as possible.

Why Not Panic, is Elevated Radon Exposure Serious or Not? 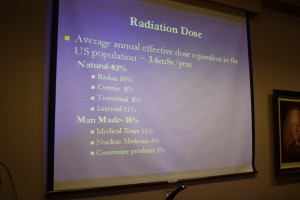 Our goal – and the goal of radon experts – is not to scare the general public, but instead to make them more aware about the dangers of the odorless, tasteless and colorless gas. It isn’t much of a problem outdoors, out in the open, but when it’s confined and collects inside a building it can cause some pretty serious health issues over an extended period of time. Furthermore, when combined with exposure to tobacco smoke, it increases the risk of lung cancer exponentially.

Dr. Daniel Cluff, from the University of Exeter says that there’s no reason to be alarmed by the influx of recent reports.

Radon exposure is the second leading cause of lung cancer behind smoking and before second-hand smoke. That should provide a little perspective to some, especially when you consider how serious second-hand tobacco smoke exposure can be. Just think radon exposure is much more prominent than that.

The real dangers come from years and years of prolonged exposure. That’s not to say there’s no short term harm, but at the very least there are no visible symptoms of it. That is exactly why there’s no reason to panic about high radon levels in your area, or if they are discovered in your home.

Test Before You Worry

It is recommended that you test your home for radon at least twice a year, once in the summer and a second time in the winter. This is because the levels can fluctuate greatly, thanks to a lot of different factors like the current season, amount of air flow in the home, and even soil makeup beneath your foundation. Some areas are more susceptible to radon however it can be found anywhere. Long story short, every homeowner should have their home tested regardless of location.

What if Radon is Found?

There will always be a small amount of radon in a home, but if levels are detected above the recommended action limit you’ll need to do something about it. What steps you will need to take will largely depend on the concentration of radon in the home.

In simple cases, homeowners can install a high-efficiency HEPA filter which screens and filters out dangerous particles in the air, like radon. In more extreme cases, homeowners may have to hire a contractor to install an advanced mitigation system which lowers the concentration of radon by removing it from affected areas of a home.

Be sure to read further about elevated radon levels, general dangers and how to mitigate a problem if one is discovered.

Via: The Sudbury Star