Washington state residents might be interested to know about the details of a study conducted by the State Department of Health that outlines the levels of radon in the state. Residents – and interested parties – can pay a visit to the site and take a look at what areas of the state have a high, medium and low radon risk. It turns out some of the areas with the highest risk are the most populated including King, Snohomish and Pierce counties. The area with the highest risk, of course is the Cascades. 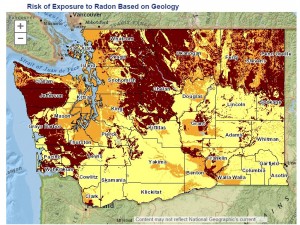 This information was actually published back in January, 2014 so those who are looking now are a little late to the party. That’s okay, because this news comes at the opportune time – National Radon Action Week is October 20th – 26th.

Radon is a virtually indetectable gas, because it’s odorless, colorless and tasteless. There is no way to identify its presence other than to test specifically for it. Luckily, you can purchase a DIY home testing kit for about $15-$30. You can also hire an experienced radon professional to test your home for you.

Radon Risk May Be High In Your Area

Radon is a naturally occuring gas, that is released as a decay product of trace elements in soil and rock such as Uranium. Once released into the air it continues to decay, giving off particles that are known as radon daughters. If these particles are inhaled, they stick to the inner linings of the lungs and continue to decay and expose the body to radiation. Eventually, this results in lung cancer – a form of the disease that has one of the highest mortality rates.

That’s exactly why we recommend you have your home tested for radon, or do it yourself. There are considerable health effects from being exposed to radon over a long period of time. Worse yet, there are no symptoms – and lung cancer symptoms don’t generally start to show until after the disease has progressed beyond a curable state.

A Radon Risk Always Exists No Matter Where You Live

We’d advise all Washington state residents to take a look at the collected information and determine whether or not they are in a high risk area. To be honest, everyone should have their home tested even those living in a low risk area. Radon can exist anywhere regardless of geographical location, and even though you may be in a low risk area – it’s still possible for the deadly gas to collect in your home.